To subscribe to updates watch my GitHub repository. New posts get added as pull requests.

This blog post is a response to a reddit user but reddit limited me to a 10,000 character response. As a compromise I decided to say everything I wanted to say and link back from this reddit thread. The following is a quote of myself and this blog post is an elaboration on my reply.

(i.e. even the same SHA256 hash artifact). Expanding on this. I recommend that your final release pipeline be from a Git tag.

A simple example is a Java library. Your library is released to a hosting provider like Sonatype Nexus. By releasing from a tag you publish the binary only once and ship that binary through different environments of the testing process (dev, qa, stage, prod). It is important to note that what lands in production is what was tested. I recommend the full testing process be performed on the Git tag (even duplicating the fast running tests run on a pull request).

The same statement should apply to any “artifact” even if that “artifact” is a Docker image or a whole machine (like an AMI in Amazon AWS if you practice immutable infrastructure).

I’d like to explain the workflow I’ve developed to help relay exactly what I mean by this.

Before you read on

While some of the diagrams I’ll share show Jenkins. I’d like you to focus on the workflow itself since it is tool agnostic and is generally a decent workflow I developed to be in a CI as code system where CI code is stored in the repo of the code being built (like Travis CI, CircleCI, Jervis: Jenkins as a service, Jenkins multibranch pipelines, Jenkins X, etc

Git workflow in a picture

Generically, I call my method GitHub flow with releases. I’ll explain later why I think this is different. 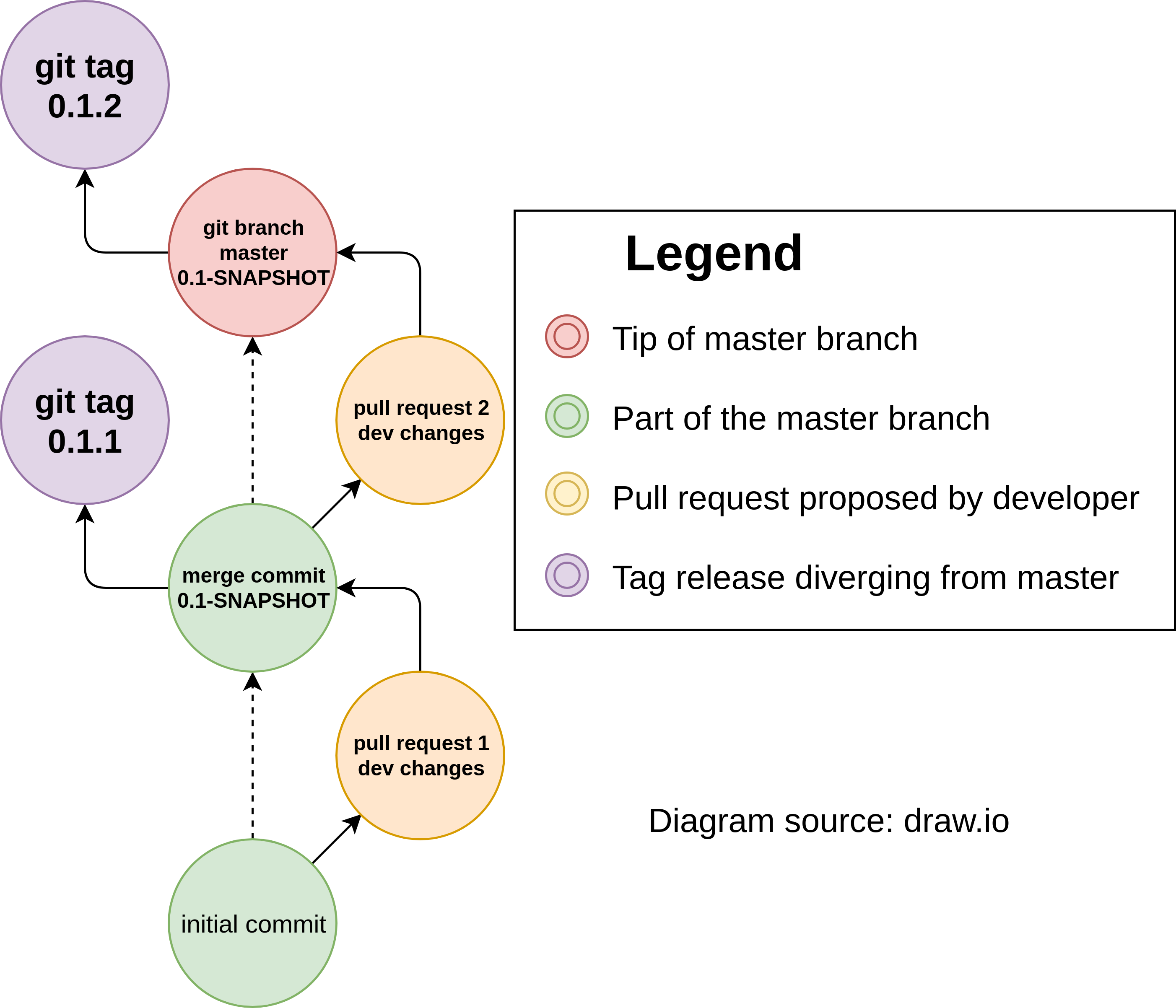 The thing I’d like to point out in the above diagram is that there are three separate events.

CI pipelines in a picture

Here’s a second diagram I created. It is color coordinated similar to the “GitHub flow with releases” diagram. The following diagram illustrates a different dimension of the three events.

Note: Each column in the following diagram is a bubble in the GitHub flow with releases diagram. 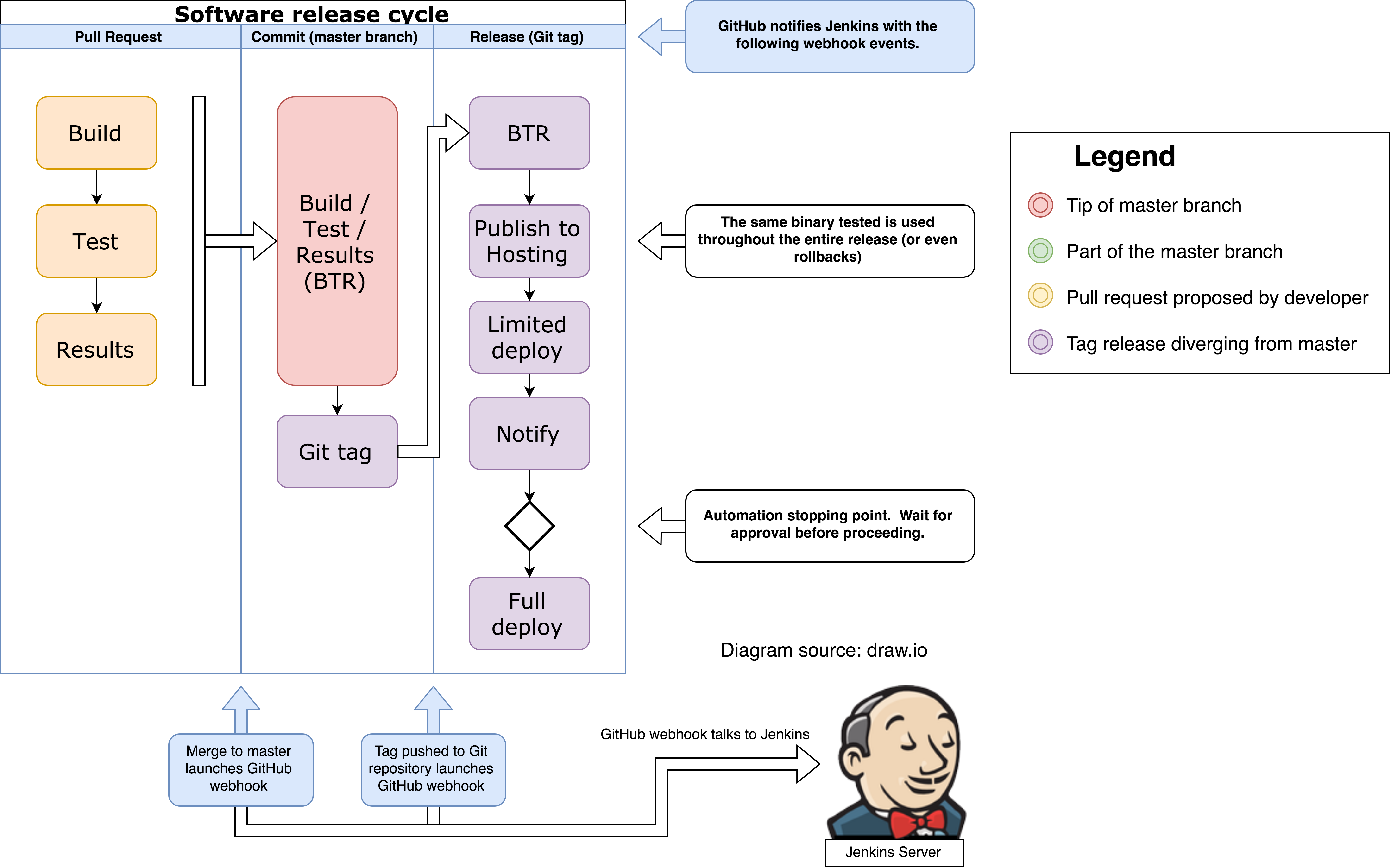 What makes this different?

What do I mean by, “I developed it”? Most interpretations I’ve read about tag releases involve pushing back to the master branch or tagging directly from the master branch. Throughout my career implementing workflows in mega-sized companies I’ve found many limitations to this. Automated releases can be really hard. Often, some of the tips I mentioned (such as Git tags diverging from branches) are things I came to realize by myself and have not ever seen it mentioned in actual articles which discuss Git in the context of automated releases or team workflows.

I also want to explain why I feel it’s different than similar “tag release” methods.

If you’ve read this far I imagine you’re interested to learn more. I’ve created a real world example project which is a Jervis CI project (a side project of mine where I support Travis CI YAML in Jenkins but not relevant for this discussion). I’ll explain the parts that matter.

The CI as code files are in .jervis.yml and the .ci/ folder. The .jervis.yml file eventually launches the .ci/Jenkinsfile.

Inside of the Jenkinsfile you’ll see two sections of code:

This is a really simple example so the “Tag release” phase does’t have much because it’s not a real product.

But this is basically where all of the production pipeline would occur.

There’s a lot of things I purposefully left out above because I could talk all day about this and I feel like I’ve written too much already.

The important thing to note here (to re-iterate my first sentence) is you really want to deploy the things you actually tested (binary-wise). Your prod pipeline should be running everything your test pipelines ran and then some if you want it to be fully automated.

Let’s remember the real problem being solved. Increase your confidence to deliver your product on a regular basis. This workflow enables that and by keeping changes small you reduce the risk of change.